Heresy from a Heretic

A long time ago, I had this weird idea for all the stories that I'd written before - that they were in an alternate reality, trapped with in the computer. They were about as aware of us on Earth as we are of the deities we worship to. The adventure was one of flight and fancy, and dealt a lot with believing in things you could never prove were real, very akin to how I view religion. I'd always been fascinated with religion, never feeling I fully believed a set of words someone else penned and never going to a service apart from weddings and funerals, and the occasional accidental invitation with friends. I never felt I belonged, the heretic in sheep's clothing.

Sure, I could follow along with any "be a good soul" concepts - the ones that transcend one religion and bleed into many. But the roots, the stories that were spun are the parts I couldn't figure out.

The song "One Tin Soldier" was something we'd listen to quite a bit at home. Go ahead and hate your neighbours, go ahead and cheat a friend. Do it in the name of Heaven, you can justify it in the end.

They were talking about how people claimed to be doing things in the name of their gods, and therefore felt justified in all the pain and suffering they caused. Like the terrorists we've see splattered across the news for years, fighting full wars in the name of their beliefs. Just get along, peace on earth - it's what they were all meant to be. A person does not need to martyr themselves for me, I should never need to expect that of someone else, I should be accountable for my actions and hold others accountable for theirs.

But despite never growing up with belief systems engrained into my house, I started to build my own, one that fit into what I could accept as true. I'm based in science, logic, and the observable, calculable world. I know that we're not at the point yet where things can be explained fully. And sometimes I don't want things to be explained fully - sometimes I'm content in thinking that the odds, so disproportionally minimal, could only manifest from something I'll never begin to comprehend. Science is, after all, magic tied in pretty bows for people to understand, according to Julie Kagawa, author.

So in short, am I religious? No, but yes. I won't do anything in the name of a god or a deity if it defies my core beliefs. Be a good soul, make sure that whatever I do, I can live with in the future and look back, knowing I made a decent decision.

I'm just a sentence, it's somewhat of a metaphor for how small, how insignificant I can be, compared to the thousands of thousands of tomes in existence and those that are still to be written. I get to choose what my sentence says, whether it be inherently insignificant or something that can change the course of the world. I get to choose whether it can do good things or bad, or nothing at all. I have the ability to be anything with my sentence, but I don't have a lot of time.

Hey Everyone! It's been a long while since I wrote anything, but that's because I haven't really thought of what to write.

I thought I was better; my life is the present, not the past. The past is just something I lived through, a series of events making me ME. I was fooling myself, but to what extent I was never sure. My personality was altered, sure. My views on life were a little different, but whose wouldn't be?

I'm not sure why this term, in my final year of university, that I really started to show symptoms of my past again, but it was here and now, nine years after my external torment ended.

Things that may have caused it: (1) being given an executive position in a club and then being excluded from meetings and decisions, never being asked to help with anything, etc. (2) getting a part-time job at a cafe and then being fired for being too slow, but nothing else. (3) being part of a group of four very intelligent, yet stubborn, people for lab work. (4) getting yelled at for not pulling my weight as a volunteer even though the other person always refused my help when I asked. (5) not getting the high marks even though I wasn't doing much this term.

I've always had a belief that people shouldn't see me crying, that it shows my weakness. It wasn't a good thing to show weakness as a child because that's what the bullies liked to see. I used to keep my tears in until I could find a corner to cry in. I still try to, more out of habit and not wanting to ruin the atmosphere of the room than anything else.

My boyfriend doesn't like it when I cry, he doesn't like it when I'm sad and he's honestly the best person I could have ever hoped to spend my life with. He tries to find me when I disappear, and when he can tell I'm sad, he lets me cry it out and helps me forget about the pain so I can keep going.

I got a really bad mark on a midterm, worse than most of the rest of the class, and I started to call myself stupid, useless, worthless. I yelled at my boyfriend for no real reason and then ran off, hoping to make it back home so I could cry my eyes out. I had approximately a twenty-minute walk, at the end of which I concluded that it would have been better for everyone if I was never born, that I made everyone's lives miserable and it would be a favour to everyone that I just vanish. My boyfriend made it back to my house before I did and was waiting for me. He gave me a giant hug and then cried with me, partially because he thought he was part of the reason I was feeling like that.

This was only one of the many times this summer that ended with me in tears. Any time I was around the clubs I was on the exec team for, I'd end up crying because of how excluded I felt, how useless I knew myself to be. Whenever I was in the room and people weren't actively interacting with me, I felt ignored. If people said anything less than perfectly positive, it was negative.

It got to the point where I couldn't get out of bed anymore. If I did manage my way, the world was just grey, like a miasma was floating around me similar to Olaf's snow cloud. I wouldn't look in the mirror while getting ready so that I wouldn't see myself; I knew it wouldn't be good. I didn't see happy, and I was envious of those who were. I couldn't laugh and everything I did or looked at made me either feel empty or like I needed to cry.

I'm not one to be suicidal. My peace with that was made when I was thirteen years old; when I considered it and all of the pandemonium that would follow. But I knew enough about mental health to know that I needed help before this could get worse before it took over my life. 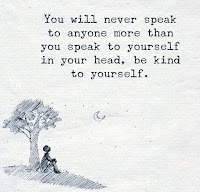 It's not as easy to stop yourself as it is to stop other people from saying the bad thoughts we all get from time to time.

I guess the thing I'm trying to say is this: the last demon you'll have to fight, the last darkness you'll have to brave, is yourself. It's the shadows that are in your head, whispering dark things.
Posted by Lys at 21:27 No comments: